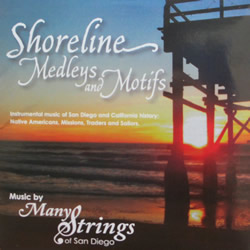 There are over 200 tribes of Native Americans in the United States. Their traditional music emphasized rhythm (through drums, rattles, etc.) and melody (through singing and chanting.) The melody is often carried through words, traditional language patterns, and syllables. The songs were created and performed for a variety of reasons, including honoring nature, love, victory in battle, a good harvest, for children as game songs, and lullabies. Traditional music utilized wooden, stone, and clay flutes, rattles, drums, rhythm sticks with notches, rocks, shells, voice, and in some areas, string instruments with moveable bridges.
California Native American Music
California Native Americans sang and danced, and continue to perform, in order to honor their heritage and ensure success with the "spirits.” Their dances are dramatic opportunities to communicate with the "spirits” about their needs, for example what type of game to hunt, the need for rain and good crops, etc.
Southern California Indians used flutes, whistles, rattles, drums and musical bows. Many of these instruments were made from elderberry wood, reeds, turtle shells, deer hooves, bones and hollow logs. The "bull roarer” whistle was made with a piece of flat wood and string. As the wood was whirled around it made a "roaring” sound. Flutes were especially popular during courting. They were shaped like tubes and had holes for changing the pitch. Rattles were made of gourds, split tulle sticks, deer and goat claws, and cocoon bunches. The tulle stick rattles were made by splitting the tulle down to the middle and tying off the bottom so that when you hit the stick it made a "clapping” sound.
San Diego County Native American Music
There were four main tribes and languages in the San Diego County area when the Spanish arrived. They were the Kumeyaay (spoken by the Kumeyaay and the Diegueno), Cahilla, Luiseno, and Copeno. Each group continues to preserve and honor its language through elders, tribal education centers, and musically at tribal halls and pow-wows. Both the Kumeyaay and Luiseno had stringed instruments with one or two strings. The string was stretched across a bow and the pitch was changed by moving a bridge. The San Diego area tribes also had flutes made of wood and bone. The Luiseno had a basket drum that was "scratched, stick drums, and an instrument similar to a "tambourine” made from a bent tree limb.
Five Recommended Recordings
Note: The Indian Store in Escondido, California ( 338 West El Norte Parkway, 760-746- 1303) is an excellent source for this music, art, and instruments. I have found their staff to be very knowledgeable and helpful. There are many beautiful recordings, and the store has a listening center for you to sample and suggestions regarding new recordings.
1. Under the Green Corn Moon: Native American Lullabies by Silver Wave Records
2. Solo Flights: Various Native American Artists, Sampler Series Vol.1 by Sound of America Records
3. Sacred Spirit: Chants and Dances of the Native Americans by Virgin Records
4. Footprints of Our Ancestors: Native American Flute Music by whirlwindstudios.com
5. Traditional Kumeyaay Music by Gloria Castaneda
Lesson Opportunities
1. Music Appreciation: My students enjoyed and valued both traditional and contemporary Native American music. The students also enjoyed playing along with the recordings using a variety of traditional instruments.
2. Music-Art: Sand painting or Native American-inspired artistic responses can be enhanced by Native American music. I found the flute music to be especially well suited to accompany graphic art projects.
3. Music-Film: Discovering Native American Music and Pow-Wow were very informative films that provided a visual demonstration of the music.
4. Music-Geography: The students can make a map showing historical and present-day geographic boundaries of local and California Native American groups.
5. Music-Instrument Creation: Making gourd shakers, and other percussion instruments mentioned above, is not difficult and they can be decorated in traditional patterns.
6. Music Shared: I had many Native American students with parents that were involved in traditional music. They were very often willing to share that music with my class, thereby providing the best experience of the original music of the area.
(Regarding sources for the information on Native American music, please refer to the Table of Contents list of references. Additional information was also acquired from interviews and conversations with Native Americans in Valley Center, California, and Ernest Siva, a Native American musicologist. Information was also acquired from visits to the California missions in San Diego, San Juan Capistrano, Santa Barbara, and La Purisima.)
©2021 Many Strings, San Diego California
Take Control, Manage Your Website: Netguava.com

Take Control, Manage Your Website
This site is built on our CMS which empowers you to update, manage and maintain nearly every aspect of your website with ease. Learn More